Federal Managing Director of ASB Deutschland in visit to BiH 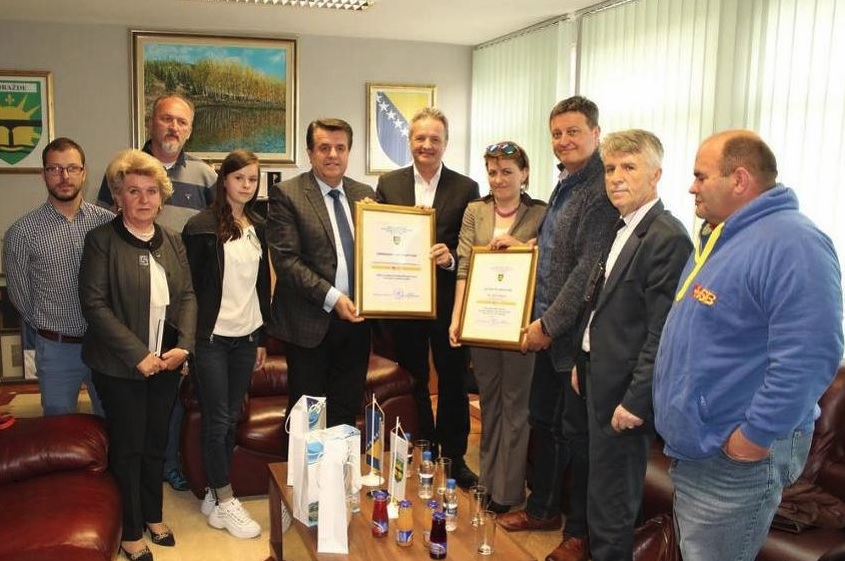 Federal Managing Director of the Arbeiter-Samariter-Bund Deutschland eV. Mr. Ulrich Bauch visited in May ASB South East Europe, offices in Bosnia and Herzegovina. On this occasion, together with Regional Director of ASB SEE Mr. Elmir Bojadzic, he visited selected municipalities in BiH, where ASB SEE has been implementing projects for over 25 years.

Mr Bauch was socially welcomed in Gorazde, where he met Mr. Mauhamed Ramovic, the Mayor, announced the continuation of cooperation on the implementation of new projects that ASB plans in this area.

Namely, ASB in Gorazde, but also in the municipalities of Pale and Foca in the FBiH, has so far realized numerous important projects for the construction and reconstruction of housing units for returnees, as well as programs for sustainable return and reintegration.

In addition, the ASB provided direct social and economic assistance to extremely vulnerable families not only in Goražde, but also in the municipalities of Gornji Vakuf, Uskoplje, Foča in the FBiH and Pale in the FBiH.

“We talked about the new projects that will be implemented by ASB SEE offices in Bosnia and Herzegovina. We have offices in 33 countries where we implement our projects,” said Mr. Bauch.

He confirmed that Gorazde had a priority, since the time when this city suffered floods. On the other hand, the implementation of one of the many projects implemented by ASB is currently in progress.

“We are currently implementing a project to renovate seven houses for families whose housing facilities are fully affected by floods and landslides. Good cooperation continues and we are happy to have such an organization in BiH and that Goražde is one of the priorities in the realization of their projects,” said Mayor, Muhamed Ramović.

During his stay, Mr. Bauch and Mr. Bojadzic also visited Public Enterprise Zavod Pazaric, which has been working for years with people with disabilities.

With great interest and a desire to find out more about the way in which the Public Enterprise of Pazarić is functioning, Bauch emphasized the importance of creating better living and working conditions for people with disabilities. In conversation with v. d. Director of the Institution, Senad Muharemovic, he underlined the importance of respecting all rights guaranteed by the UN Convention on the Rights of People with Disabilities.

“It is very important that people with difficulties have right to work and be paid for the work they do. 3 people with this disability are employed in the ASB headquarters. In past decades, in Germany, the care for these people has improved considerably. Wherever living people with disabilities deserve the same rights as other members of society”, Mr.Bauch stated, adding that it is also important to solve the problem of adequate inclusive education for children with disabilities.

Mrs. Muharemovic concluded that in BiH, unfortunately, people with disabilities are still unable to enjoy all rights guaranteed by the UN Convention on the Rights of People with Disabilities and although, adequate living conditions are provided to the beneficiaries of this Institution.

She explained that thanks to significant support and friendly association from Germany, the Institution realized projects that enabled the deinstitutionalization, ie the construction of new facilities in the local community inhabited by the beneficiaries. In this way, the project and social inclusion of this population have been successfully implemented.

On this occasion, ASB directors also visited the workshops of the Center for Education and Training, and the youngest users were happy with the sweets they brought.