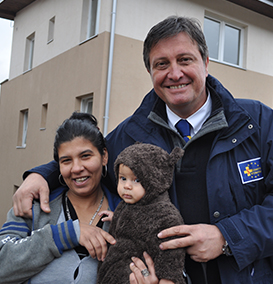 In the presence of the EU Program Manager, Mr Vlado Pandurevic, Zenica mayor, Mr Husein Smajlovic, Assistant Minister from the State Ministry of Human Rights and Refugees, Mr Sefket Hafizovic, and project partners, Austrian Hilfswerk and Bosnian Roma Association Kali Sara, in the presence of local media, ASB has officially handed over the 16-flats apartment building for Roma families to the Zenica mayor under the social housing concept.

Social apartments of 25m2 – 65 m2 size in the total value of € 281,465 are built within the € 3 Million-valued EU-funded Roam Action Project implemented in the partnership of Austrian Hilfswerk, Bosnian Association Kali Sara and ASB. Zenica mayor thanked all involved for this valuable contribution to providing assistance to vulnerable Roma families in Zenica and expressed his willingness to continue financially contributing to such projects in the future and investing in efforts for Roma social inclusion in Zenica municipality.