New homes for Roma families in Bosnia and Herzegovina 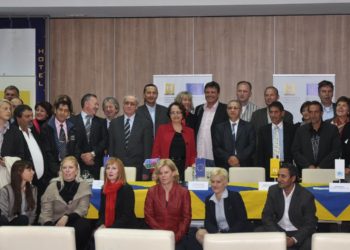 In the partnership with Austrian Hilfswerk and BiH Roma Association Kali Sara, ASB is bringing to its successful end the Roma Action project funded by the Delegation of the European Union to Bosnia and Herzegovina in the total value of € 3,03 million out of which over € 500,000 were collected from local authorities.

The project directly provided 152 new or reconstructed homes for vulnerable Roma families through social housing concept and rehabilitation of existing housing units and associated technical infrastructure in 13 BiH municipalities and Brcko District. Further to that, sustainability grants are delivered to a number of the most vulnerable Roma families and awareness risen on the necessity to promote Roma rights and obligations concerning housing, employment, health and education sectors.

As the proof of the project success, consortium partners HWA, ASB and KALI SARA were recently awarded another Roma Action Project Phase II by the Delegation of the European Union to BiH in the total amount over € 2,8 million out of which over € 300,000 were contributed by local authorities. The Phase II project has the similar objectives as the Phase I project focusing on provision of additional 140 housing units and accompanied activities in 10 BiH municipalities. The project started on October 1st 2015 and will last for 22 months. By being awarded the additional contract with the EUD BiH, the Consortium has proved its full capacity to manage large, multidimensional and integrated projects focusing on the most vulnerable segments of the society as the whole. This action, in which ASB takes a significant part, additionally promotes the organization’s ability to play significant role in effectively assisting those in ultimate need in the Balkan region.