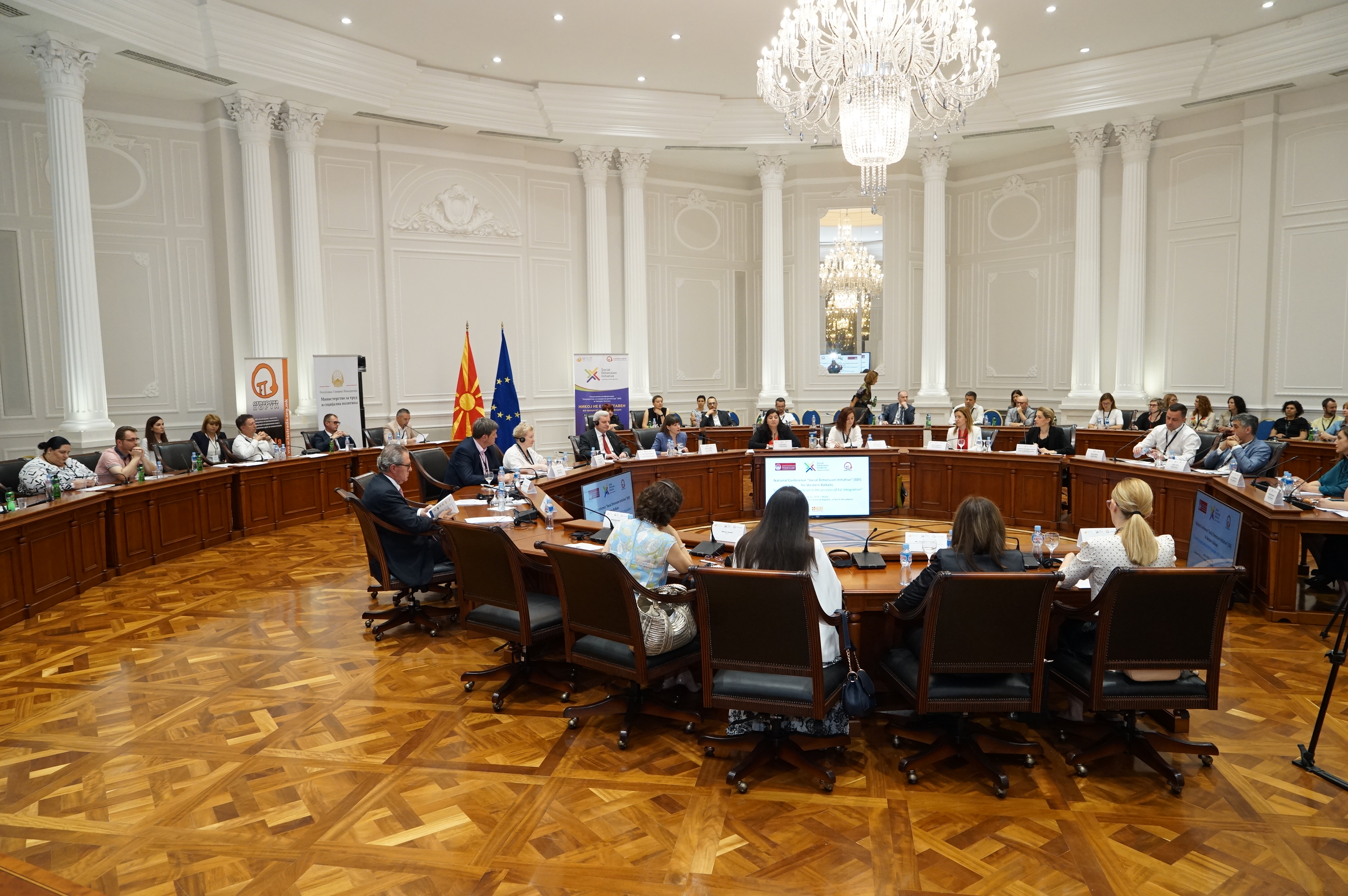 On Friday, June 21st, fifth national conference „Leaving no one behind in the process of EU integration“ was held in Skopje, organized by Arbeiter Samariter Bund SEE in cooperation with the local partner La Strada and together with Ministry of Labor and Social Policy of the Government of the North Macedonia.

The Conference is organized within Social Dimension Initiative (SDI), launched in 2018 as joint endeavor of the ASB and local civil society organisations from the Western Balkans, and supported by a group of distinguished members of the European Parliament, to enhance dialogue between the civil sector, citizens and political elites both in European Union (EU) and WB on the necessity for the stronger social dimension of the EU integration for WB countries.

“The idea of ​​the European family is based on the principles of solidarity and equality for all citizens. Social reform for the first time as a universal right for all low-income households introduces child and educational allowance, GMP and social security for the elderly, which directly affects the reduction of poverty, especially child poverty. The ultimate goal of the whole reform is not raising the rights of the rights, but activating the users of the labor market and their permanent exit from poverty, which is also strengthened by the social teams and the institutions that will directly work with the families. I urge the European people to continue and deepen their cooperation in the field of social policy”said Mila Carovska, Minister of Labor and Social Policy of the Republic of Northern Macedonia

Social Dimension Initiative is fully supported and financed by Arbeiter-Samariter-Bund Deutschland and implemented by ASB South East Europe together with local partners from 6 WB countries and local Government. In accordance with this, Mr. Knut Fleckenstein, Arbeiter-Samariter-Bund Federal Board Chairperson, addressed through video message on SDI Conference in Skopje: ” The big reforms have to be done by Government and the Parliament, but the little things, the small project that shows that we are convinced that no body should be left behind, we can start soon. What we need is the support of the Government and the Municipalities, as well from NGOs and volunteers who shows that we are not going to wait, we want to do something”

ASB and La Strada cooperate for years now on number of projects in North Macedonia that are directly supported by the EU and German government. Thus, H.E. German Ambassador Thomas Norbert Gerberich, expressed his full support for this initiative and added:
“North Macedonia has made impressive progress in last two years. We must fully devote ourselves to the reform process that will offer opportunities and best living conditions for all” .

“The Initiative has the main goal of providing support for the improvement of human capacities and social development of the European Union, the region, states and politics in general. This will be achieved through pooling the strengths of the public, civil and private sectors, promoting regional co-operation for more effective mechanisms for solving problems in the social sphere, and promoting changes in the center of which are the most vulnerable categories ” underlined Elmir Bojadzic, Regional Director of the ASB South East Europe.

“We believe that only by bringing together the efforts, knowledge and capacities of the institutions, civil society organizations and local self-governments can we achieve a quality and long-term change in the social sphere. In doing so, we need to ensure that civil society organizations are equal partners with the public sector” explained Marija Todorovska, Program Director of the La Strada.

“Social inclusion strategies must ensure that no one is left out. In this context, it is essential not to forget those who are separated from their homes without the social network in the country to support them – refugees and claimants.
With our active support, we welcome the coordination between the institutions, the EU and the Western Balkans, together with the media, journalists, national authorities, researchers and civil society, including the La Strada, to maintain the momentum and stagnant their efforts and implement all commitments under the initiative of the social dimension and to support social development goals ” explained Ms. Rosana Dudzhak, permanent coordinator of the UN in the country.

About Socio-economic sphere of the Republic of North Macedonia and social entrepreneurship talked Marina Mateska, program manager, National Coordinator of the network of social enterprises, Association for Research, Communication and Development – Public: “Social enterprises are part of creating a new social economy that we need to respond to global and local challenges such as global warming, poverty and unemployment. Social enterprises are business entities that promote sustainable development and new ways of running business, relying on local resources while supporting the creation of new jobs. Primarily, they are focused on specific market segments, primarily in the local context. not yet fully exploited, but numerous challenges of our living burdens require the braver development “

On this topic also talked Olimpija Hristovska Zaevska, Adviser to the Prime Minister for International Economics and Development and Milica Petrushevska, Consultant for La Strada.

“The World Bank Bilateral Estimates on Migration Stocks in 2017 shows significantly bigger rate of emigration, with a total of 564,949 people or around 30% of the population leaving outside the country. The 2018 EC report noted that “large-scale emigration of skilled workers and low levels of enrollment in post-secondary education have left the economy struggling to rebuild a qualified young workforce” said Petrushevska.

The best examples of the successful support of the ASB and La Strada in North Macedonia and social services in local communities, were presented by representatives of the Ministry and organizations, members of the regional IRIS Network who are at the same time providers of the social services.

“The development of social services at the social level is a key factor in responding to the needs of the citizens. Only in this way can we build a more inclusive society for everyone!” reminded Sashko Jovanov, Executive Director of the Association “Humanost”

Dusko Tomsic, Minsiter’s cabinet adviser on labor and social policy supported the initiative on local level, adding: “We reaffirm our commitment to improving the functioning of labor markets and education systems in order to achieve sustainable employment and reduce poverty”


“The IRIS network is composed of organizations that provide social services for vulnerable groups of citizens through the exchange of experiences and support to strengthen and enhance their services. The network is active in the region, but also in North Macedonia, 28 organizations from the country are members. Within the frames of IRIS, La Strada will support the process of licensing civil society organizations by providing mentorship, which will contribute to improving the quality of social services for the most vulnerable citizens” said Stojne Atanasovska Dimishkovska, Program Manager from Open Gate- La Strada.

The mentoring program for 65 least developed municipalities in the WB was conducted within SDI. The program provided assistance in developing project ideas for the joint Regional Portfolio. Almost 200 projects proposals (27 from North Macedonia) will be developed, ready for financing and implementation.


Gordan Velev, Country Director for ASB South East Europe Office Serbia and SDI regional Coordinator, closed the fifth national conference in Skopje: “It is necessary to put social policy on the daily political agenda much more intensively. And it is necessary for the EU integrations not to be just a bureaucratic processes but have a clear and concrete social dimension”

Next SDI national conference will take place in Belgrade, in September 2019.