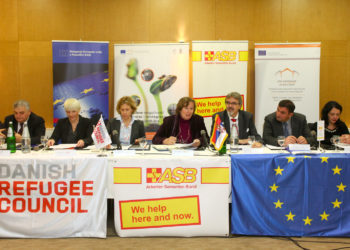 EU donation of equipment for the establishment of the companies for the returnee communities in Kosovo*
Belgrade, October 13, 2015 – In addition to housing and security, certainly the most important issue for every family considering returning to Kosovo* is employment. Thanks to the EU donation, 23 small enterprises are established and 67 families with over 300 members received economic support for sustainable return in Kosovo*. Through projects implemented by The Arbeiter-Samariter-Bund (ASB) in partnership with Sveti Nikola and Danish Refugee Council (DRC) with organizations Božur and Sveti spas, returnee communities are supported with equipment for the establishment and expansion of enterprises in order to improve socio-economic conditions of life. The projects are financed by the European Union through the The Delegation of the European Union to the Repulic of Serbia and co-financed by the UNHCR.

EU projects carried out by the DRC and the ASB aim to support the efforts of the Serbian government in resolving the issue of displaced persons in the Republic of Serbia through support for sustainable return to Kosovo*.

The overall value of the returnees support project is 2.2 million euros, of which 636,000 euros are dedicated to economic empowerment. Total of five grants of 50,000 euros, and 18 grants worth from 20,000 to 22,000 euros were approved. Applications for grants in the form of equipment was collected through the publicly announced call. The grants were awarded returnee communities that applied in the group of at least two households for a small grant and a minimum of five households for a large grant. The founders of the company, in addition to awarding grants in the form of equipment, were provided assistance in business plans development, business and professional education, as well as continuous monitoring of business development. Mentoring ment support for start-ups in the form of working with experts in the field of agriculture, trade, services, small business development and financial management firms. Activity of the companys are primary and secondary agricultural production (animal husbandry, farming, fruit growing, food production), production of plastic bags and internet providing.

„We hope that these projects and their successful results will encourage the public to implement similar projects that will support the return and reintegration of internally displaced persons” is a common conclusion of DRC and ASBa.

„Thanks to a donation of the EU we have started production and employed six people. We intend to hire more so. For members of returnee families a stable job is an opportunity to ensure a secure existence and remain in Kosovo*. I hope that these projects will serve as an example how to support the return of IDPs” said Jovan Simic, recipient of a grant from the Shilovo, founder of the Ko-plast.

The process of awarding grants in equipment to returnee communities had been led by the Election Commission consisting of representatives of the Office for Kosovo and Metohija, the DRC, the ASB and Božur, with the support of the Commissioner for Refugees and Migration RS, UNHCR and monitoring units. Support the founders of the companiesr is continuing trough the intensive exchange of information, advicing, expert consultations and promotion of their businesses.

* This designation is without prejudice to positions on status, and is in line with the United Nations Security Council Resolution 1244/99 and opinion of the International Court of Justice (ICJ) on the declaration of Kosovo’s independence.

Arbeiter-Samariter-Bund, the German non-governmental organization for 23 years in the Balkans helps the most vulnerable population groups. More than 60 000 people in Albania, Bosnia and Herzegovina, Montenegro, Croatia and Serbia received, through projects of this organization, safe homes and a chance for a new life.

The Danish Refugee Council operats in Serbia from 1994 in order to promote peace and stability through support for the achievement of durable solutions for refugees and internally displaced persons. Since 2002, the Danish Refugee Council implemented projects for IDPs support in return and reintegration process through the following activities: provision of information to users, providing housing solutions, assistance in the form of transport to the place of return, returnee packages and the implementation of programs for economic empowerment.