Visit of Mr. Fleckenstein to ASB and IDC in Serbia 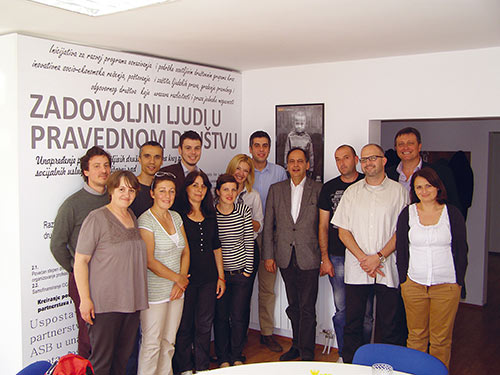 On Friday 7th June 2013, Mr. Knut Fleckenstein, Chairman of the Federal Board at the Arbeiter-Samariter-Bund (ASB), visited projects implemented by both the ASB Country office for Serbia and the Samaritan Partner organisation for Serbia, the Initiative for Development and Co- operation (IDC).

Mr. Fleckenstein visited the City of Pozarevac, where ASB has implemented a project aiming at the improvement of living conditions of Internally Displaced Roma families from Kosovo. The project provided durable housing solutions to 20 IDP families which previously lived in man-unworthy conditions in a slum popularly called the “Cardboard Village”. The construction of the houses was financed by the Delegation of the European Union to Serbia and was finalised almost three years ago. However ASB, jointly with IDC continued to provide support to the families in order to aid them in their integration process in Pozarevac. The Samaritan partners were able to obtain US funding which was used for the establishment of a Social Enterprise for the collection of secondary raw material and the construction of a community centre which will assist the school children in their education. Mr. Fleckenstein met with representatives from the City of Pozarevac and had the opportunity to talk to the beneficiary families. The families expressed their satisfaction with the support from both the Samaritan partners as from city officials all having the same goal, which is the inclusion of the Roma population within the Pozarevac society.

Mr. Fleckenstein continued his field visit in Serbia by visiting the Municipality of Topola where ASB constructed an apartment building for Social Housing in a Supportive Environment for 10 families in 2012 with funds from the German Federal Foreign Office. Here Mr. Fleckenstein was able to see the functioning of a social housing concept which enabled the integration of these vulnerable families within the society with ongoing support from the local Centre for Social Welfare. ASB and IDC presented to Mr. Fleckenstein the general approach which is being used in the support to IDP, refugee and vulnerable families in Serbia. Next to the provision of housing assistance the Samaritan organisations aim at continues support to the families in order to create sustainability in their integration process. In Topola this was done through funds obtained by the American NGO – Catholic Relief Services (CRS) that purchased three green houses for the inhabitants of the building who now produce their own vegetables. This concept is not just business-orientated; it aims at improving the resocialising of the families in the society since many of them used to live in Collective centres.

The day was concluded with a joint meeting at the ASB/IDC premises in Belgrade where Mr. Fleckenstein had the opportunity to meet the staff members of the organisations and to meet with the care-takers which are being employed by IDC that provide Elderly Care to families in the Municipality of Mladenovac.