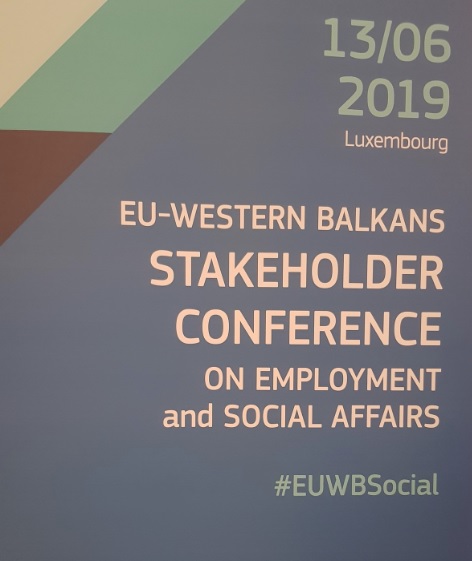 “We believe that by dealing with reforms of the social welfare systems, by creating truly inclusive societies for the most vulnerable – only than “regional disputes” can and will be resolved. We wanted not the borders or the differences- but, the people to be in the center of the debate. Due to that fact, ASB felt motivated, encouraged and capable to initiate, finance and implement the Social Dimension Initiative for EU integration of the WB” said Gordan Velev, Country Director of Arbeiter Samariter Bund Serbia and coordinator of the regional ASB Social Dimension Initiative on EU-Western Balkans Stakeholder Conference on Employment and Social Affairs in Luxemburg on June 13th.

A Stakeholder Conference brought together EU institutions, government representatives, civil society and social partners to discuss their role and contribution to employment and social policy development and implementation.

Talking about civil society’s suggestions, expectations and contributions to social policy development in the Western Balkans, Mr. Velev pointed out that Social Dimension Initiative has a global objective to attract EU, regional and national political and other support for people – centered improvements and social development in the WBs. It will be done by joining forces of public, civil and private structures, additionally promoting regional cooperation for more effective problem solving mechanisms in the sector and by provoking people-centred winds of change focusing on the most vulnerable.

“We seek partners and cooperation so that we can all together implement regional project portfolio – imagine the impact of 195 small scale but targeted intervention in the social fabric of the least developed communities in the region. The impact for those in need, for the society in general, for the EU integration! We want to continue monitoring the situation in the region and implementation of the Declaration “ underlined Velev adding that ASB aims to explore policies and measures that can most effectively resolve pressing needs in the communities and strengthen regional cooperation and cohesion.

Both events were organised by the European Commission’s Directorate-General for Employment, Social Affairs and Inclusion.