Construction of an Educational Community Centre and playground for children in the Roma settlement in Pozarevac, Serbia 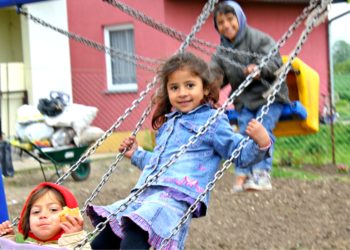 In the fall of 2010, ASB completed the construction of 20 prefabricated housing units for Roma IDP families in the City of Pozarevac in Serbia which was funded by the European Union under the IPA 2007  programme. Since that time ASB has invested many efforts to support the inclusion of these families within the Serbian Society. The burning problem faced by the Roma population in Serbia, next to employment, is the education of school children. During the past several years ASB has identified the need for extracurricular education of school children was beneficial for inclusion purposes.

The Bureau for Population, Refugees and Migration of the US Government decided therefore to support the construction of an Educational Community Centre and Playground through the “Julia V.Taft Refugee Fund”. The total amount of € 40,000.00 was invested in the reali- sation of this project. The US Embassy provided € 21,000.00, the City of Pozarevac € 12,000.00, the Foundation Ana & Vlade Divac € 5,000.00 and 2,100.00 was provided by ASB. The new Community Centre will be used for providing additional education to the school children within the settlement, work on inclusion of the whole Roma society in Pozarevac and also engage in projects for women.

This project shows that ongoing care needs to be provided to those most in need and teaches us that synergies are crucial for sustainability of vulnerable groups and their inclusion within the society. This joint effort of the European Union, US Government, City of Pozarevac, the Serbian Commissariat for Refugees and Migration, the Foundation Ana & Vlade Divac, IDC and ASB brought together various donors and agencies in an attempt to improve the living conditions of a highly vulnerable group within the Serbian Society.

The new Centre was officially opened on the 9th July 2013in the presence of Ms. Anne Richard, Assistant Secretary of State, H.E. Michael Kirby, US Ambassador to Serbia, Mr. John Underriner, Director at PRM/ECA – Office of Europe, Central Asia and the Americas, Mr. Vladimir Cucic, Commissioner at the Serbian Commissariat for Refugees and Migration, Mr. Vlade Divac, and officials from UNHCR, the City of Pozarevac and ASB. Their presence at the opening ceremony gave additional importance to the whole concept of support to Roma families and stresses the importance the International Community puts on inclusion activities in Serbia.