Save the date for SDI national conference in Belgrade 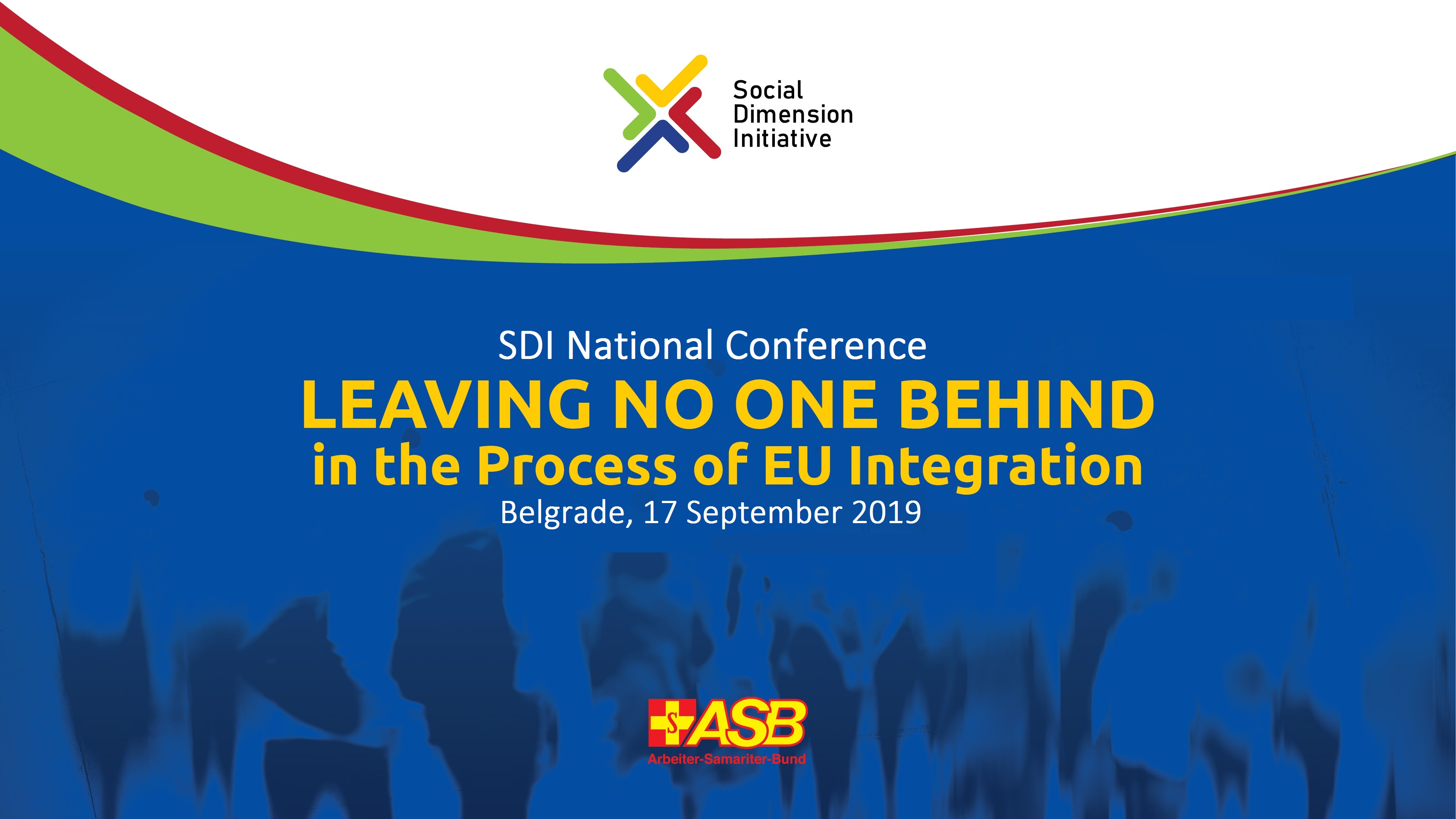 After Tirana, Pristina, Podgorica, Sarajevo and Skopje, SDI will present the results in Belgrade.

On Tuesday, September 17th 2019 in Belgrade, the National Conference “Leaving no one behind in the process of EU integration” will be held. The event is organized by Arbeiter Samariter Bund SEE in cooperation with the local partner IDC Serbia, and together with The Ministry of Labour, Employment, Veteran and Social Affairs of the Republic of Serbia.

The Conference is organized within Social Dimension Initiative (SDI), launched in 2018 as joint endeavor of the ASB and local civil society organisations from the Western Balkans, and supported by a group of distinguished members of the European Parliament, to enhance dialogue between the civil sector, citizens and political elites both in European Union (EU) and WB on the necessity for the stronger social dimension of the EU integration for WB countries.

The main topics that will be discussed refer to the socio-economic perspective of the Serbia, where minister of Labour, Employment, Veteran and Social Affairs of the Republic of Serbia Mr. Zoran Đorđević will present the situation in social policy and employment as well as reforms within these systems in the last couple of years. Issues of the impact SDI might have in this respect and of cooperation between public and civil sector will also be discussed.

Representatives of the NGOs that implement the project Mr. Elmir Bojadžić, ASB SEE Director and Ms. Jelena Anđelić from Initiative for Development and Cooperation will provide more information about the SDI, demographic and social and economic challenges in Serbia.

ASB and IDC cooperate for years now on number of projects in Serbia that are directly supported by the EU and German government.  Therefore, we expect to welcome at the Conference special guests, distinguished representatives of the EU, H.E. Mr. Sem Fabrizi, Head of the Delegation of the European Union in the Republic of Serbia and H.E. Mr.  Thomas Schieb, Ambassador of the Federal Republic of Germany in Serbia.

Mr.  Knut Fleckenstein, Federal Board Chairperson ASB e.V. Deutschland shall assign the support of the ASB Deutschland for the implementation of this project and as a former member of the European Parliament will point out the importance of SDI and project portfolio under the SDI, for the WB, integrations and Europe in general.

The best example of the successful cooperation of the ASB and local partners is the mentoring program for 65 least developed municipalities in the WB, conducted within SDI. The program provided assistance in developing project ideas for the joint Regional Portfolio. Almost 200 projects proposals will be developed, ready for financing and implementation. The representatives of Serbian municipalities will present their project ideas at the Conference in Belgrade, and the participants will have an opportunity to learn more about the mentoring program conducted by ASB and IDC in Serbia.

This Conference is the last of six national conferences planned in 2019 within SDI in the Western Balkans.

Namely, at the Opening Regional Conference that was held in November 2018 in Belgrade, the SDI gathered Ministers in charge of the social policy from the Western Balkans, regional civil society and media as well as representatives of the EU institutions and other international partners have expressed their firm commitment to support the Initiative. On this occasion, the Declaration on Improving Social Policy in the Western Balkans was signed by all WB social Ministers and constructive dialogue initiated furthering improvement of social and employment policies and measures.

In order to address country specific topics and needs and continue national and dialogue with the European partners, we organise this national conference in Belgrade. In addition to presentation of the specific social needs and problems in the Republic of Serbia, the event is an opportunity to present 15 local communities that take active part in the SDI and to address, in particular, issues of IPA funding and other donors’ support for social issues; social impact of EU integration and local social support.

Looking forward to seeing you on 17th of September in Belgrade!