ASB and LIR CD about children rights in Bosnia and Herzegovina 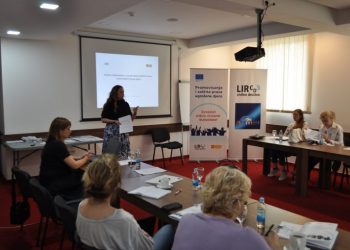 The project is implemented in Bosnia and Herzegovina by Arbeiter Samariter Bund together with LIR Civil Society and financed by the European Union.

The events attended representatives of institutions and civil society organisations from Banja Luka and the Brcko district, dealing with children rights.

Public debate started with presenting the project, so participants could closer understand its main goals and problems regarding children’s right in Bosnia and Herzegovina. Afterwards, the Analysis was presented, showing all four categories that were included: migrants, Roma, bullied children and children at risks.

“The aim of this research is to see the position of the child protection in Bosnia and Herzegovina with a focus on children who are victims of violence, children at risk, children of Roma and migrants children, refugees and unaccompanied children, and to create activities that will guide the further development of this sensitive areas, due to raising the quality of services and protecting the rights of children, “said Biljana Zgonjanin, director of LIR Civil Society.

She emphasized that the focus of this analysis is to point to international and domestic legislation, discrepancies between theory and practice, key issues, opportunities and potentials that can be the basis for further, more detailed research and analysis of needs in the area of ​​child protection in Bosnia and Herzegovina.

Jadranko Jankovic, the director of the NGO New Generation from Banja Luka, said that this kind of the public debates are extremely important because they bring together representatives of the governmental and non-governmental sector, ie people who deal with legal regulations and protocols, and those who implement them.

“The protocol is quite wide, comprehensive, but also quite useful. However, the question is where to begin? Many problems have been identified and targeted, and we have received many useful recommendations, but the question is the practical application of all this. Metaphorically speaking, if we have a house that needs general cleaning, we cannot simultaneously move all the furniture and everything in the same time, but we have to start from something. That something may be very important, so maybe we need to put priority on prevention among all, due to it saves the resources and leads to reduction and savings in further implementing activities “said Mr. Jankovic.

Representatives of the Ombudsman for Children of Republika Srpska spoke about the importance of prevention.

“We believe that the most important prevention is the education of children, but also the education of adults, as well as an adequate response in all cases of reported violence. It is also important to keep these records and to provide information to the relevant institutions. This is crucial, “said Gordana Rajić from the Ombudsman for Children of the RS.

Public discussions were also attended by representatives of the Ministry of Education, Science, Culture and Sports of the Unsko-Sanski’s Canton, who spoke about practical examples, especially when it comes to migrants children.

“Networking is important, as is the promotion and protection of the vulnerable children rights. This is one of the most important topics in the country because all of us, regardless of the institutions we come from, have the same or similar problems. So, for all of us, some unified rules apply, and it is important that we respect our regulations and international conventions, “explains Albiana Trnavac, secretary of the Ministry of Education, Science, Culture and Sports of the USK.

She pointed out that this Ministry has done a lot on the education of marginal groups and their inclusion in the system.

“We have provided access to the education system to all marginal groups, but it is not yet at level as we expect. However, as an institution we are satisfied, because we have established inclusive centers and we have move far forward when it comes to inclusive practices. We have also included in system people, asylum seekers in USK and their children. We always do a lot on these topics and that is the reason we participate in this kind of debates “emphasized Mrs. Trnavac.

“This is our first time to participate in this one meeting. It is important that we exchange experiences and it is very important that Velika Kladusa is involved, because we often circumvent us as a small community, and we are facing the problems of migration and the problems of migrant children, peer violence and everything else. It is very useful networking for the Una Sana Canton, as well as for our local community, “said Jasmina Keserovic from the Democratic Youth Organization Velika Kladuša

The project „Promote and protect vulnerable children rights“ is addressed to support democracy and human rights through the promotion, protection and respect of children’s rights through the civil society and governmental organizations.

Next public hearing will be held in Sarajevo on fall 2019.

This project is funded by the European Union and implemented by ASB SEE & LIR CD in Bosnia and Herzegovina.