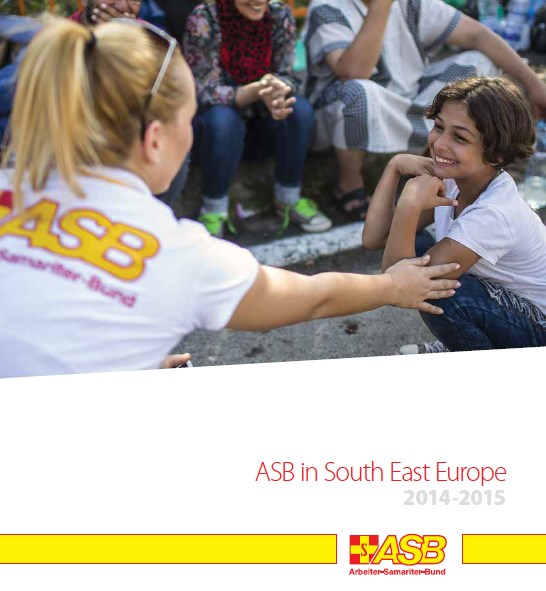 The past two years in the whole region of the South East Europe, have seriously challenged our organisation to additionally prove its capacities, motivation and professionalism gained during over the last 20 years of hard and highly effective work in the wider Balkan area. Namely, severe and repetitive floods in Serbia and Bosnia and Herzegovina in 2014 followed by unprecedented refugee crisis that developed through the Balkan refugee route towards European Union countries, demanded rapid and effective response in assisting vulnerable flood victims and refugees.

During those chaotic times, unfortunately still lasting, ASB personnel from South East Europe Offices in Serbia, Bosnia and Herzegovina and Kosovo and its reliable local partners from Balkan countries of FYROM, Greece, Albania, Monte Negro, Croatia, Serbia, Bosnia and Herzegovina and Kosovo, have been investing enormous organisational and personal efforts to cope with dire situation related to nature and man-made disasters. ASB was the first international organisation that reacted to the flood crisis in Bosnia and Herzegovina and Serbia delivering food and water just 24 hours after the disaster occurred in these countries. With funds of the EU and German Foreign Ministry, ASB is still (re)constructing flood destroyed and damaged homes in the region and provides assistance to state structures in managing the post-crisis recovery. In addition, the yet developing refugee crisis, swiftly spreading to the Balkan area, demanded multi-sector emergency assistance. It has widely ranged from delivery of food and non-food items, construction and organisation of refugee reception centres, provision of technical expertise, financial and infrastructural support to state and local authorities to organisation of mobile medical and food delivery services aiding refugees on move.

In figures, over € 7 million for floods and close to € 4 million for refugees are spent through a significant number of projects mainly funded by the European Union and German Foreign Ministry. Further to the challenging response to the sudden crisis, ASB has been dealing with € 4.5 million value projects targeting grass root civil society organisations that directly deals with social service delivery through the ASB-established IRIS Network and actively participated in provision of social housing for vulnerable Roma citizens within the Roma Decade 2005-2015.

With main goal to help those in ultimate need to which the help usually comes late or never, while being faced with such a challenging scope of intervention in the South East Europe, ASB SEE had to maximize the use of its experience and knowledge, quickly adjust and strengthen its human resources and regional structure and motivate all involved to work with passion and love for humanity. We are of the opinion, and visible results and impact are in support to it, that ASB manages those challenges extraordinarily. Due to the fact, I sincerely thank all our staff, our partners, local authorities and particularly our donors that make the ASB story worth telling. WE HELP HERE AND NOW…..