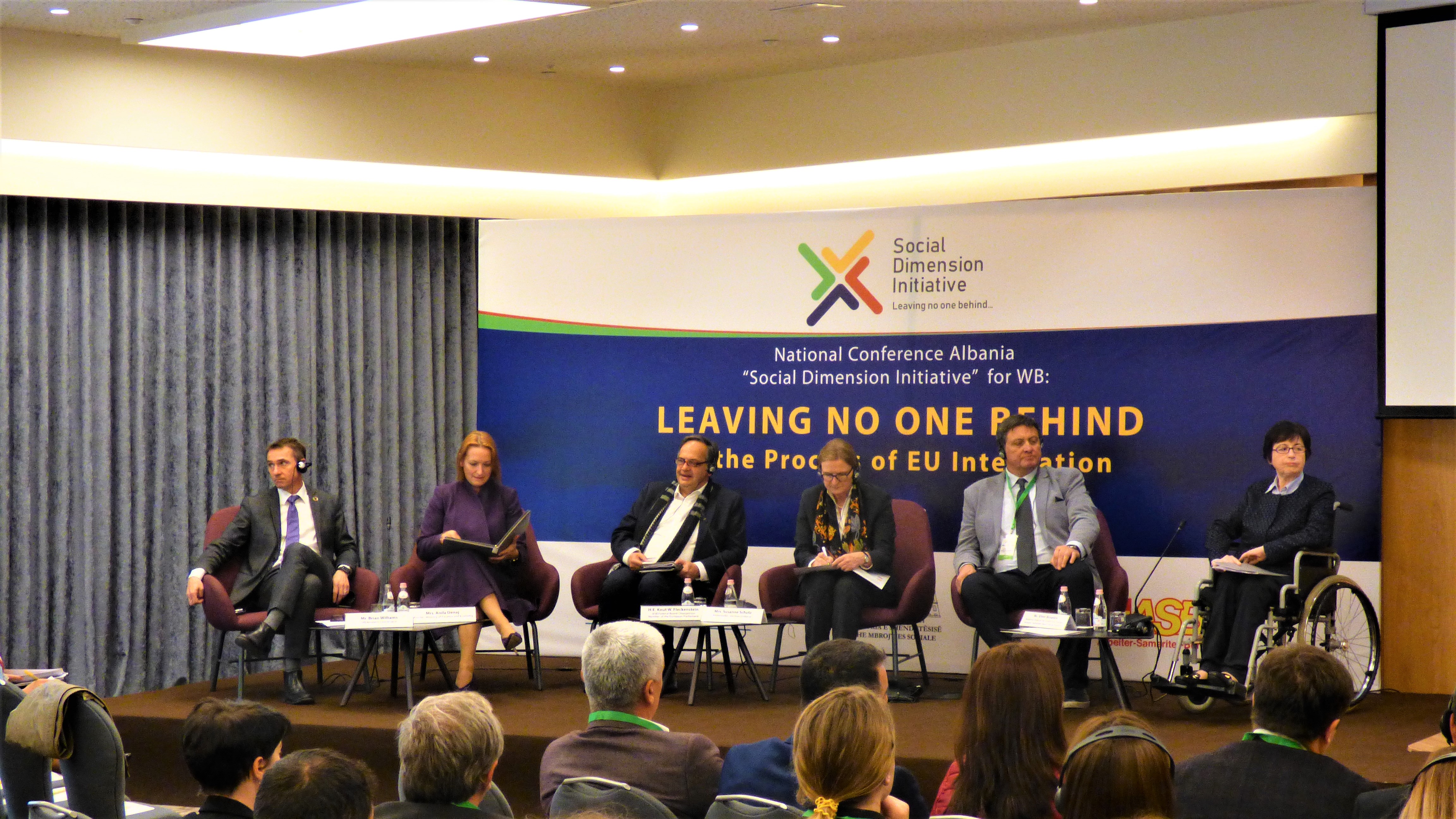 First National Conference under the Social Dimension Initiative for Western Balkans “Leaving no one behind in the process of EU integration” took place on April 10th in Tirana, organised by ASB and national partner in Albania – ARSIS, together with Ministry of Health and Social Protection of the Republic of Albania.

This conference was organized with the main purpose of addressing country specific topics and needs and also to enhance and continue the dialogue with the European partners. The main focus was to give an opportunity to local communities’ part of the mentoring process to discuss specific social needs and problems in Albania and also to address in particular, issues of IPA funding and support. Discussion took part in two different panels.

Mr. Knut Fleckenstein, ASB Federal Board Chairperson and the Member of the European Parliament opened the conference with remark that the Social dimension is not enough on our agenda: Main goal of this conference is to make real partners in this process. If we can bring civil society and governments form all our countries to work in this together, that will bring you closer to the EU.

Representatives of the Ministry of Health and Social Protection of Albania, Mrs. Merita Xhafaj and Mrs. Bardhylka Kospiri, underlined the fact that EU integrations were more focused on legal side of the process, leaving behind social dimension and that SDI comes in the right time. They pointed out the importance of collaboration and strengthening the network of CSOs together with state institutions in the frame of social dimension initiative. Mrs. Bardhylka Kospiri, Deputy Minister, Ministry of Health and Social Protection emphasized the contribution of ASB in the implementation of this project and all the support not only from the Ministry side but also the commitment of the Municipalities to develop projects and to increase social impact.

Mrs Susanne Schutz, German Ambassador in Albania, supported this initiative adding that German will remain the reliable partner to Albania in this efforts.

UN has also recognized the importance of this initiative, so Brian Williams, UN resident coordinator, one of the main speakers in the conference, said that is important for all to work together in cohesion and underlined the fact that we have to identify and eliminate the factors in Government that make exclusions form our society.

The Social Dimension Initiative was launched in 2018 as part of the endeavor of the ASB and local civil society organisations from the Western Balkans, and supported by a group of distinguished members of the European Parliament, to enhance dialogue between the civil sector, citizens and political elites both in European Union (EU) and WB on the necessity of stronger social dimension of the EU integration for WB countries.  Already at the Regional Conference held in November 2018 in Belgrade, the SDI gathered Ministers in charge of the social policy from Western Balkans, regional civil society and media as well as representatives of the EU institutions and other international partners have expressed their firm commitment to support the Initiative. On this occasion, the Declaration on Improving Social Policy in the Western Balkans was signed by all WB social Ministers and constructive dialogue initiated furthering improvement of social and employment policies and measures.

Mr. Elmir Bojadzic, Regional Director for ASB South East Europe reminded that this initiative is implementing through joined forces of public, private and civil sector by provoking people centar and we will be leaving no one behind.

Specific topics related to social needs in each municipality were also presented in second panel, where Deputy Minister of Ministry of Health and Social Protection in Albania Mrs. Ardiana Jaku and Executive director of Initiative for Social Change ARSIS Ana Majko discussed on socio-economic situation and reforms in Albania.

SDI in Albania will be implemented in 12 selected municipalities nominated by the Ministry and around 40 ready-to-be-funded social project will be developed whose main ideas were grouped in six major fields, as mentioned on Conference:

(a) Development of Social Politics at a local level and capacity building of service providers at local units;

(b) Establishing new services for different communities at a local level;

(c) Improving the life quality of individuals with disabilities;

While Mrs Ana Majko presented Municipalities under the SDI projects and their interventions, Mrs Jaku gave us fine topic to think about: How this Initiative will progress when it comes to funding of the project created within SDI portfolio?

Also another important topic was the discussion of economic indicators and how they affect the social change, covered by Mrs. Artemis Dralo, Deputy Minister, Ministry of Europe and Foreign Affairs and Ms. Ada Shkurtaj, Local Expert for IPA II.

In overall this conference not only highlighted the work being done in the field but also enabled building the bridges of a continuous communication system in improving the civic society services offered in Albania, together with the immense support of the European partners.

This event was first of 6 national conferences planned to take place in next period in all WB countries selected for implementation of the SDI project.